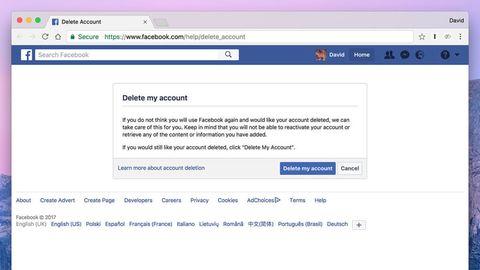 And just like that, 9 years of my life were gone to the data heap. Caveat of course that my account reanimated in seven days and this was today. Facebook conveniently offers this if you get cold feet. Just an FYI..

I decided to journal about this. To capture what changed for me in the seven days away from the almighty book.

Below is the edited short-list of cow patties, observations, and ideas that came to my juvenile mind re: My Facebook Vacation. It is written in real time, as it happened.  I had some other stuff too but it was kind of embarrassing, so I have edited a few things.

You people do not really want or need that kind of insight into my troubled thoughts..

I scrolled through a couple of boring tweets. Twitter should have been called Shitter.  Instead of tweeting, we could all be shitting.  This seems a bit more accurate to me, especially in the era of 45, the King of Shitting.

Now I am scrolling on Instagram. God, my feed! It’s full of my music heroes hanging at Americana Fest. Not helping.  This just reminds me that I am a loser with a capital L.  Why don’t I look like Amanda Shires?  Can anyone tell me this?

Okay, no more social media for the day.

So I lie. I keep tapping the ap!  I’m sick and must now conclude that I really am a brain-washed, social media junkie.

Do worms have asses? I should Google this.

Day 2 – Confidence and Inspiration (for a Minute)

I am over this ap tapping thing now.

I got this. By the way, who really says “I got this” outside the internet? Nobody.  That’s who.

This Facebook vacation thing is a breakthrough! I have so much time now. Like the two minutes I spent writing this would have been devoted to mindless scrolling.

I am on fire, inspired.

How about I write a comedy pilot about a woman that adopts a hairless house cat? The cat has dementia. Like if BoJack Horsemen were an adopted cat with dementia.

A talking cat with dementia is akin to being bastard cousins with Pinky and the Brain and talking horsedudes. That is of course IMHO.  Again, who says this in real life?

Did you know that five seasons of BoJack Horseman have been made?  Five seasons.

Maybe I will write a novel called “Blogicide.” It’s about a blogger who creates a blog from the perspective of Sylvia Plath, if Sylvia had been a tattoo artist. She only inks black shoes on her customers and sings karaoke to Black Sabbath.

Do you think one could buy a War Pigs shirt?

You can.  I just Googled it.

Accidentally tapped the Book ap on my phone again. Long day ahead.

I have conceived of a three act play called “The Dinner Martyrs.”

I need someone to help me with dialogue though.  I just have one character complaining about asparagus so far.

The Dinner Martyrs is three act monologue by three different “Martyrs” who all seem to hate one item on their plate (like asparagus)  and simultaneously insist they must eat it while complaining about having to eat it.

Did you know there is a restaurant named “Martyrs Steakhouse?” The first Yelp review in my Google search rated it three stars and commented “it was a decent dinner.”

It’s almost like one of the characters I have nearly created wrote this Yelp review!

Odds bodkins. I didn’t touch either remaining social media ap on my phone yesterday. No Instagram. No Twitter/Shitter.

I feel so free.

Not really.  I feel the same except I am staring at the wall instead of looking at my phone.

I really need to paint.

My mom is dying.

I am watching her die.

I know.  I was already batshit crazy but I seem to be getting worse.

As her brain deteriorates, her behavior becomes odder and odder. She is obsessed with various skin infestations. Fleas, ticks, spiders and other parasitic worms are constantly attacking. Her face is populated with scabs. Some heal. Many others never do. She picks at them constantly.

She is up all night most nights and sets off the security system opening the door and calling imaginary cats.

She sees a woman named Margaret lurking about.

Now and again, I will lie on the sofa while she sits next to me and watches the weather.  Last week, she reached over and pulled the blanket over my toes.  That made me cry.  The few remaining moments when I am her daughter and she is my mom are slipping away.

I know my brain is going to become full of holes too.  Like a Swiss cheese. My mom’s two sisters have (or had) dementia.  One passed away last year.  I don’t know about the other sister.

I often look out the windows of the Marta train when we pass by Oakland Cemetery and consider the lives of the people buried there.  Nobody wants in the ground. Even if they think they do, they really don’t.

But nobody gets out of their end. You meet it.  You make it.

It’s difficult to consider. But I feel I have a few years to plan. I guess I want to die on my own terms, if fate allows.

Did you know that Oregon has a pretty comprehensive Right to Die Law? It’s called the “Death With Dignity Act.”

I can do this.

I think this break was good for me. I spent a lot less time on Social media in general. Okay, I may have Googled a lot of random shit but who doesn’t?

Initially, I felt a bit depressed about being away from it.  But I also feel like there can be a healthy balance. And I was a bit unbalanced.  Only a bit.

I mean, I’m still unbalanced (only a bit) but that’s a whole nother issue.

I am keeping the Book account for now but am removing the ap from my phone. I think having Facebook confined to a desktop will force me to manage my time better.

the conclusion, the wrap, the center of the tootsie roll tootsie pop..

I missed interacting with my pals.  I did not miss the political junk.  I missed memes.  But I listened to even more music and even wrote a couple of shitty song lyrics. So there is some measurable progress.

I feel I have better control over my Facebook habit and I was surprised at how much less I used all social media by not using Facebook.  This pleased me.  I only hope that now I can sustain it.

I did not list all of the original blog/story/play ideas I had on day two (and beyond) because they were a bit silly and off-the-wall.  But there could be an audience for “Bathtub Gin for Beginners” or “METH, METH, METH! The Musical”